Imagine the importance of a bionic eye.  Better yet, let me put that in context for you …

I don’t know if you have ever heard of macular degeneration, but my father has it and his mother before him had it as well.

That pretty much locks me in when I get a bit older.

If you don’t know about macular degeneration … consider yourself lucky.  It is the the #1 cause of vision loss in the USA and right now it’s pretty much incurable.

It is caused by retinal degeneration, which simply means the part of the eye that provides images to the brain sends more and more blurry “photos” as the disease progresses.

So … driving a car, reading a book, watching television (let alone managing the remote) becomes more and more difficult as time goes on.

In the end, the world just gets fuzzy … and the freedoms you took for granted with good eye sight pretty much wither away.

… and that is why the article below is so important to me.  Enjoy …

“We can rebuild him…” is part of the opening dialogue of the 1970s hit TV series ‘ The Six Million Dollar Man’. Since this science fiction adventure was first broadcast, considerable progress has been made in the field of ‘bionics’. Medical science is a long way off from bringing someone back from the dead, however bionic implants in terms of arm and legs are being developed.

As a new adjunct to the technology, a three year trial has recently been completed for bionic eye retinal implants. The results are promising, and the technology appears to be safe.

The experimental device, known as the Argus II, functions to improve the vision in people blinded by retinitis pigmentosa. RP is an inherited, degenerative eye disease that causes severe vision impairment. The Argus II restores low levels of vision in functionally blind patients. 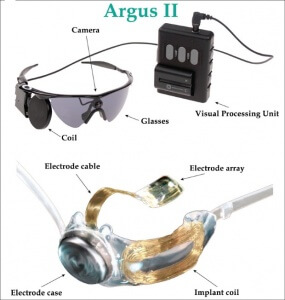 … Trials were conducted on 30 subjects in 10 centers in the United States and Europe. Tests showed that 89 percent of the subjects in a trial reported that they received strong images when using the device …

For the full article, see TheLatestNews.com